Looking to Start a Strong 2020 Campaign 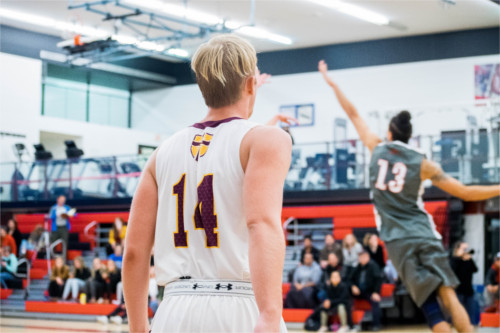 The FLBC Men look to start off a strong 2020 campaign, as they look to rebound from a tough December loss to Emmaus Bible. The Conquerors, who beat Emmaus earlier in the year by a score of 97-76, lost a tough one at home with a final score of 80-79. Coach Bierle and the Conquerors have been working hard this new year to prepare for two games at Sisseton Wahpeton College.

This is an exciting matchup as Sisseton Wahpeton comes in tied a top of the Conference at 5-0 while FLBC comes in hungry and ready to prove itself at 4-2. Sisseton, who won the NIAC Conference Title last season, looks to continue a strong 2019-20 campaign. Both teams sitting near the top of the standings know that these will be hard fought games. The Men play their first game at 8pm Friday, with the second following on Saturday at 3pm.

Coach De Joseph and the Mustangs will be led by D’Laino Paige, Jamerick Moton, and DJ White. All three are averaging over 17 points per game which puts them in the top 15 in scoring in the NIAC with Paige leading the charge at 19.5 points per game at 9th in the Conference. Terrell Shellman looks to lead the Mustangs on the board as he is averaging over 8 boards a game.

Coach Bierle and the Conquerors will be led by Sophomore guard Micah Moan, who is a top 5 scorer in the Conference at 22 points per game and 2nd in the Conference in assists at 4.8. His offense charge will be followed up by Sophomore rebounding threats Mikah Olson and Luther Zeltinger, who have combined for over 14 boards a game. The Conquerors balanced attack inside and out will hope to prove a challenge for the Mustangs.

The Lady Conquerors are prepared for a focused second half after starting the Conference 2-4 this season. The Conquerors, who have played their hardest competition to start the season, look to string together some elite performances this weekend. Coach Erickson and the women are ready for a Conference battle with Sisseton Wahpeton College.

Sisseton Wahpeton College sits at 2-3 in the Conference which put them in 4th in the standings, while FLBC sits at 7th in this early Conference season. With just a half-game separating the two teams, a lot is at stake for the Conquerors and Mustangs. As the Conference seems to be led by a few heavy hitters, the two teams come into this weekend’s matchup looking to prove themselves as a team to be feared in the league. The Ladies play their first game Friday at 6 pm with a second game following at 1 pm Saturday.

The Conquerors bring a strong attack as they are led by Freshman guard Madison Trussoni who is 2nd in the Conference in scoring. Trussoni and fellow top 10 assist leader Sophomore guard Becca Olson look to share the ball with Lady Conquerors. Sophomore guard Grace Dryburgh looks to anchor the Women as she averages almost a double-double a game at 9 points and 8 boards. Freshman center Hannah Boyer comes alongside Dryburgh adding 6 boards a game. The Conqueror’s aggressive attack looks forward to a great weekend against the Mustangs.