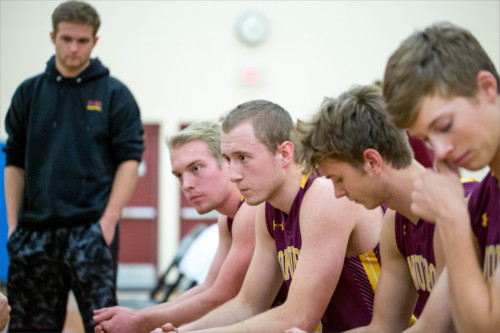 After a convincing win by the FLBC Conquerors the previous evening, the tables were turned by the Trinity Lions on Saturday night as they blew out the home team by a final score of 88-63. Outside shooting was again the factor in the game, though this time, it was the Lions with the hot hand. They scored 66 of their points on 3-pointers, including going 22-43 from behind the arc. The Conquerors were as cold as the Lions were hot, shooting only 20% from the floor in the first half including 2-16 on 3-pointers. Seven different players made three pointers for the Lions on the night, including Ty Messner with 6 and Khalil Bolden with 5. The Conquerors were led by Micah Moan and Mikah Olson with 13 points apiece, and Weston Napier pulled down 10 rebounds. The loss dropped the Conquerors to 4th place in the NIAC with the Lions holding on to 6th place with the victory. Both teams will compete in the NIAC tournament this upcoming weekend which will be played in Bemidji/Cass Lake, MN starting on Friday, February 21. Additional NIAC tournament details may be found at the following links: https://www.oakhills.edu/athletics/niac-tournament or https://niacathletics.com/.

In a very similar game to the previous night, the Lady Conquerors and the Trinity Lions played a very close contest with a tense finish. This time, the Lions got the best of the Conquerors with a 57-54 final that was decided in the last minute. Madison Trussoni again hit a big three with under 3 minutes to play, but the Lions responded with a 3 of their own to tie the game late. In the end, it came down to some clutch free throws by Stacia West to gain the lead and to seal the victory for the Lions. West accounted for over half of the Lions points in the game as she finished with 32 on the night, including 10 for 10 from the free throw line. Jena Sidle chipped in 12 points with Kennedy Nofzinger adding 10 assists. The Conquerors managed a more  balanced attack with 9 individual players scoring in the game, led by Madison Trussoni with 14, Bobbi Jo Alverson with 9, and Grace Dryburgh with 8. Alverson also had a big night on the boards, grabbing 11 rebounds including 5 on the offensive side. With the victory, the Lions also held off the Conquerors for 5th place in the final NIAC standings. Both teams will be back in action at the NIAC tournament next weekend, starting on Friday, February 21 in Bemidji/Cass Lake, MN. For additional NIAC tournament details, please use the following links: https://www.oakhills.edu/athletics/niac-tournament or https://niacathletics.com/.

In a key NIAC match-up, the Conquerors took on the Lions from Trinity Bible College on Friday night. Playing at home for the final weekend of the regular season, the Conquerors took a commanding lead early against the Lions, relying on hot shooting from the outside and tenacious defense. However, just when it looked like the game was getting away from them, the Lions clawed back, closing a 20 point deficit to 13 at the half. In the second half, it was more of the same as every time the Conquerors looked to pull away, the Lions fought hard to close the gap. In the end, the Conquerors shooting and resolve proved to be too much to overcome with the home team winning by a final score of 87-74. The Lions shot poorly for the game though did produce balanced scoring with 5 players in double-figures. Logan Klitzke had 13 points and 16 rebounds on the night with Khalil Bolden contributing 14 points and 11 rebounds of his own. For the Conquerors, it was a different story as they shot 45% from the floor, including 43% from 3-point land. Micah Olson had a big night with 15 points and an amazing 19 rebounds. Micah Moan was 10-13 from the floor, scoring 26 points along with 7 assists. Phil Berge scored 13 including 3-4 from behind the arc. Luther Zeltinger also scored 13 and went 3-6 on 3’s. With the win, the Conquerors leap-frogged over two teams to move into 3rd place in the conference with the NIAC tournament less than a week away. The same two teams will meet tonight in the final game of the regular season.

On Friday night, the Lady Conquerors squared off with the Trinity Bible College Lions from Ellendale, ND. With the Conquerors chasing the Lions in the NIAC standings, it was a big game for both teams. Points were at a premium early in this game as both teams struggled to score. Behind a persistent if not efficient attack, the Conquerors pulled ahead to a 22-18 lead at the half. In the second, both teams continued to play tough defense, making it difficult for either team to score. After trailing most of the game, the Lions roared back to tie the game late in the fourth quarter. However, the Lady Conquerors were up to the challenge and after two, huge 3’s by Madison Trussoni with under 3 minutes left in the game, the home team won by a final score of 47-41. Trussoni led the Conquerors with 24 points and 13 rebounds on the night. For the visiting Lions, Stacia West led the team with 22 points and 18 rebounds. With the same two teams playing again tonight, there is a lot on the line as the Conquerors look to pull even with the Lions in the NIAC standings, improving their position in the conference heading into the NIAC tournament next weekend.