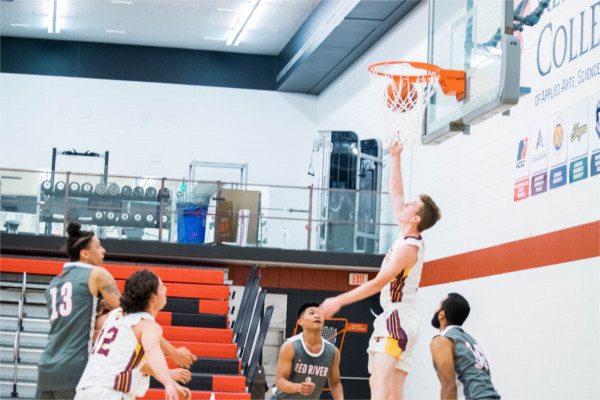 The Conqueror men entered first round play in the 39th annual NIAC Tournament with high hopes and what looked to be a good match-up for them. For one of the few times all season, the Conquerors faced off against a smaller team in the Lakers. However, the Lakers made up for their lack of size with quickness and aggressiveness on both offense and defense. After an even start by both teams, the host Lakers steadily pulled away from the Conquerors, playing with heart and determination to take the lead into the half. Coming out of the half, the FLBC men tried to up their intensity but still struggled to get into any kind of offensive rhythm. They also failed to get consistent stops against the LLTC offense. Despite a late run, the Lakers held off the Conquerors to win by a final score of 77-70. With the loss, the Conquerors were eliminated from the tournament, bringing an end to their NIAC season. The Lakers moved on to play the Red River College Rebels, losing to the eventual tournament champions by a final score of 88-74. Despite their disappointing finish at the tournament, the Conqueror men enjoyed a solid conference season and will look ahead to the ACCA tournament in Joplin, MO on March 4-7, 2020.

Meeting for the first time since the opening weekend of the season, the Conqueror women and the Rebels from Winnipeg squared off in the first round of the 2020 NIAC tournament. Playing on a neutral court at Cass Lake High School, the teams were evenly matched for three quarters with the 3rd seeded Rebels pulling away in the third quarter to eventually win, 71-59. The Conquerors were much improved since that first meeting in Winnipeg and they played the Rebels very tough throughout the game. Their zone defense was effective and they were patient on and frequently efficient on offense. FLBC even broke the full court pressure from Red River which had given them so many problems in the first meeting. In the end, a few in-game  lapses by the Conquerors sealed their fate as they were eliminated in the first round. Despite the loss, the Lady Conquerors are playing well as a team and demonstrating consistent growth and improvement. Though the conference season is now over, FLBC will look forward to the ACCA tournament played in Joplin, Mo on March 4-7, 2020.