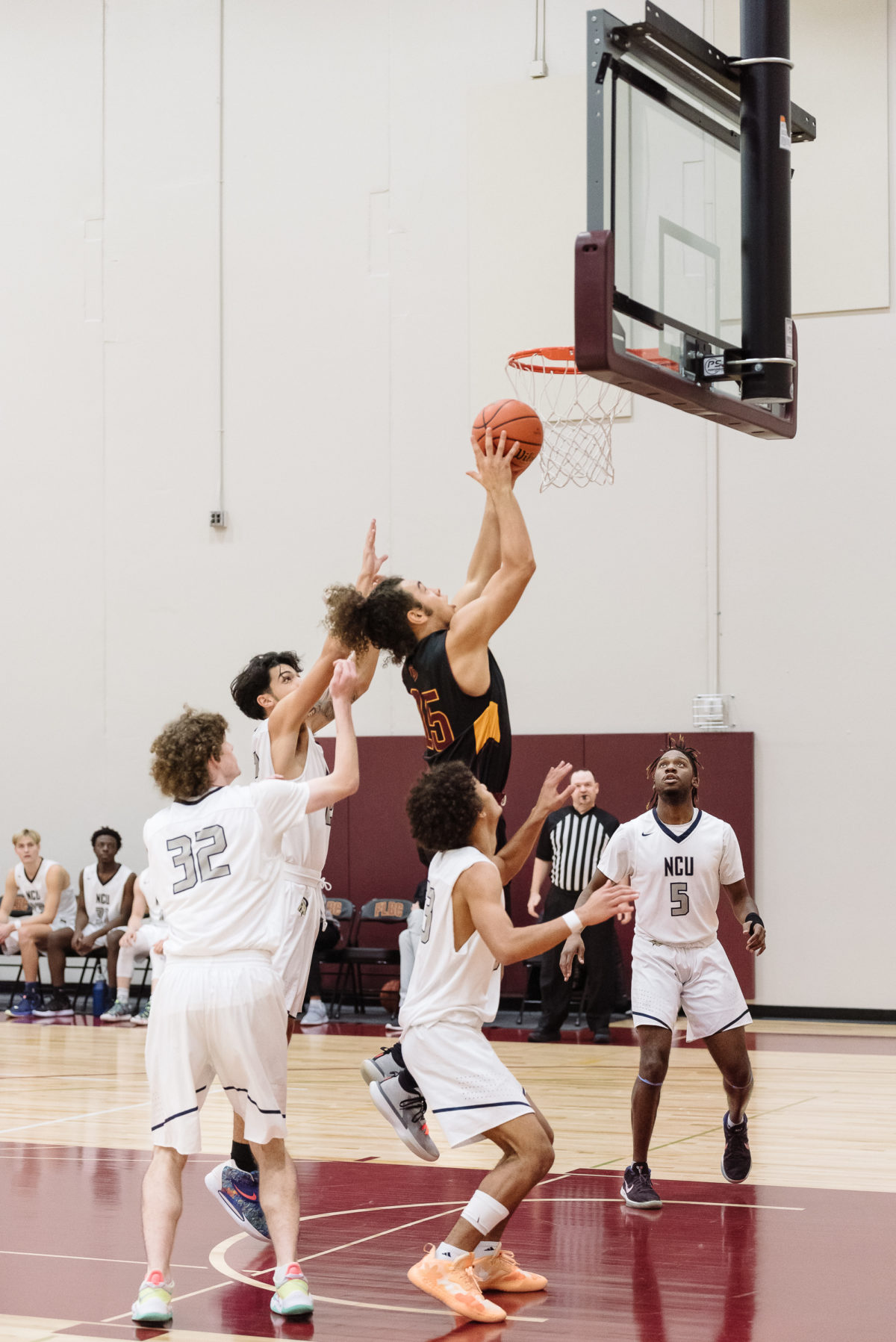 The FLBC men’s basketball team recently returned from a trip to New Town, ND where they opened NIAC play against the Storm from Nueta Hidatsa Sahnish College. On Friday night, November 19, the teams met in a physical game which resulted in a tough loss for the Conquerors by a score of 75-78. Despite being up by as much as 14 points early, the visitors had a difficult time adjusting to the increased intensity and hot shooting of the Storm late in the half as they clawed their way back to lead by 1 at halftime. In the second half, the teams played evenly with no lead greater than 8 by the Storm and 4 by the Conquerors. In the end, the Conquerors simply ran out of time and energy, eventually losing by 3 in a game that could have gone either way. Andrew Carlson had a monster game, leading all scorers with 22 points. He also secured 11 rebounds. Micah Moan recorded a triple double for the game with 15 points, 10 rebounds, and 11 assists. Jonas Fairrow scored 10 points on 5-6 shooting. Isaac Impola scored 16 points, which included 4-7 from 3-point land. Mitch Marr contributed a solid game with 9 points and 6 assists. The Conquerors were outrebounded 33-35 and allowed the Storm to shoot 58% for the game, including 60% on 3-pointers in the first half.

In round two on Saturday, November 20, the roles were reversed as the Storm pushed ahead to lead by as many as 8 late in the half. However, this time it was the Conquerors who responded with a flurry to end the half with a 2-point lead after Isaac Impola finished a 3-point play at the buzzer. In the second half, FLBC continued their strong play to push the lead to as high as 18. From there, the Conquerors maintained a double-digit lead until late in the game, winning by a final margin of 75-67. For the game, Andrew Carlson showed up big with 15 points, shooting 7 of 14 from the floor along with 11 rebounds. First-year player Jonas Fairrow played big all night with 14 points and 15 rebounds. Mitch Marr led the Conquerors with 17 points on the night, while Micah Moan added 13 points along with 9 assists. Isaac Impola continued his strong weekend, scoring 14 points on 6 of 10 shooting from the floor. Coach Bierle commented, “I was proud of the way the guys responded after a disappointing loss on Friday. We have to learn how to play all types of styles, and this was a good experience for us to win a tough, physical game against an opponent who never quit coming at us.” For the game, the Conquerors outrebounded the Storm 47-38, including an amazing 22 offensive boards. The FLBC men return home from the North Dakota road trip with a NIAC record of 1-1, and an overall record of 4-1. Up next, the men Conquerors will try to stay sharp during the Thanksgiving break before a pair of games the following week, including a rematch against the Knights from Spurgeon College on Saturday, December 4 at 3:00 p.m. as FLBC celebrates Parent’s Weekend on campus.