Conquerors Prevail in a Gritty Victory over Spurgeon College 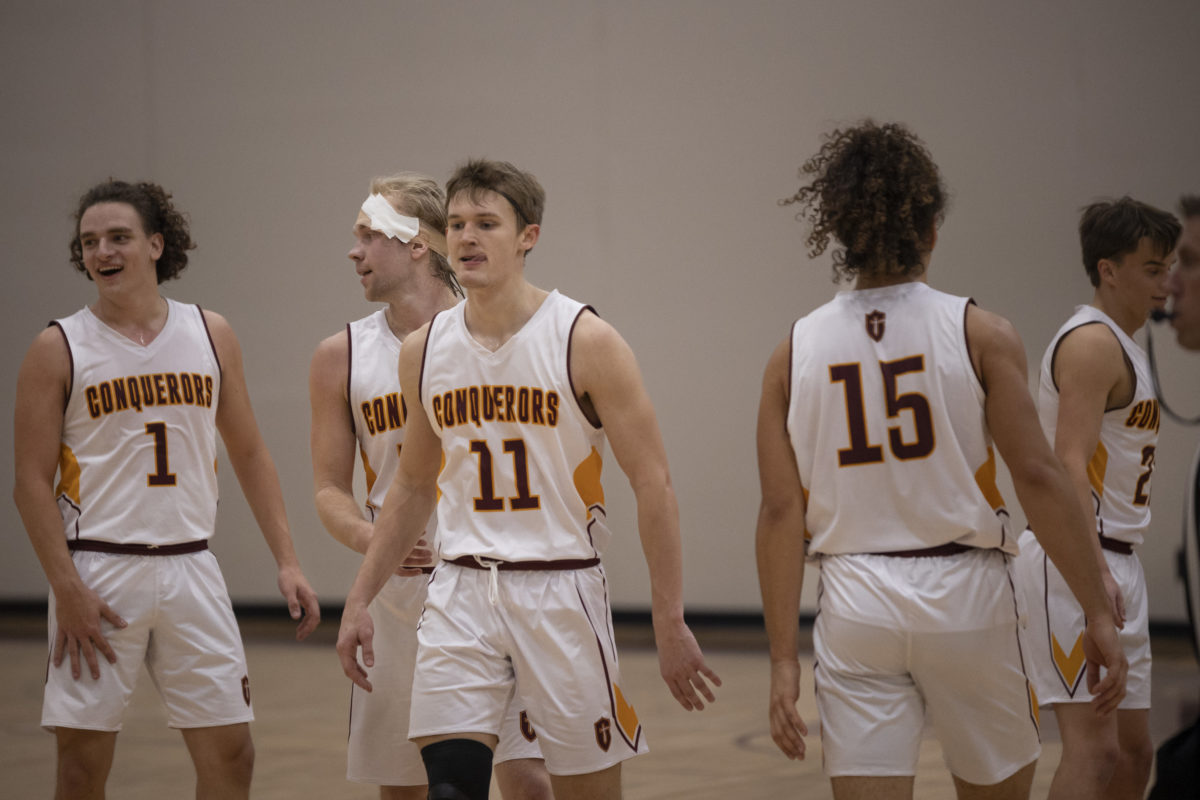 On Saturday afternoon, December 4th at FLBC, the Conquerors beat the Knights from Spurgeon College by a final score of 71-66. In a hard fought game that came down to the wire, The Conquerors held off a late charge by the Knights to secure the home victory in front of a large and vocal Parent’s Weekend crowd. Despite shooting only 35% from the floor and a woeful 45% from the free throw line, the Conquerors used relentless and timely defense to force 25 turnovers, converting them into 20 point on the offensive end. Coach Strand stated, “We fought hard tonight and showed tremendous passion, especially on a night when we didn’t shoot the ball well. We found other ways to get the job done and that’s what it takes to win games sometimes. I am so proud of our guys!” The Conquerors took a 5-point lead to the locker room after a very even first half. The Conquerors controlled most of the second half and steadily extended the lead to 12 with 2 minutes to play before almost giving the game away with poor free throw shooting and some deep and contested 3’s by Spurgeon.

For the game, Andrew Carlson led all scorers with 21 points, matching a nice effort from Brett Smith from Spurgeon who also had 21. Jonas Fairrow played perhaps his best all-around game, excelling on defense, scoring 12 points, and contributing 10 rebounds. Mitch Marr hit some big shots at several key spots in the game, scoring 15 along with 6 rebounds. Micah Moan contributed 14 points, 6 assists, and 7 rebounds, most of them with a bandage covering a cut over his left eye from the first half. Coach Bierle commented, “Seeing Micah play aggressively through his injury, along with Luke Dryburgh who didn’t fill up the stat sheet, but threw himself all over the floor and worked extremely hard on defense, was a reflection of how all of our guys played tonight. It was a gritty win for our team, and we did it together.”

The victory pushes the Conquerors record to 5-2 on the season heading into the last weekend of games before the semester break. They travel to Bemidji, MN to take on the Wolfpack from Oak Hills Christian College in a pair of games on Friday, December 10 at 7:00pm, and on Saturday, December 11 at 1:00pm. “These upcoming conference games will be important as we look to position ourselves well in the NIAC before an extended break. We will have to earn everything at Oak Hills as they certainly won’t make it easy for us,” said Bierle. The games should be livestreamed at the OHCC Sports Network on YouTube.